The following content is taken in good part from soilsensor.com (opens new window).

Plants need water periodically, but it gets a little more complicated than that, especially if you want to be water-efficient and make your plants as healthy as they can be.

The first concept to be introduced here is field capacity. Field capacity is the maximum amount of water a soil can hold, measured in volume percentage (% vol/vol). This value depends on the soil type. Sandy soils can hold much less water than clay soils, with silt in-between.

The second concept to be introduced is the permanent wilting point. That the lowest amount of water the soil can have before plants wilt and die. Humidity levels below that are not good. That is also a soil-dependent variable.

The third concept is maximum allowable depletion (MAD). MAD is the percentage of the zone between field capacity and permanent wilting point that a plant can use comfortably. This value is plant-dependant, and can change depending on growth stage.

The following graphic shows these concepts quite well:

Note that you can also fix points 3 and 4 by buying a rugged, open source version of the sensor on Tindie (opens new window). It will cost you an extra $15, but will save you the trouble.

# Fixing the cable and waterproofing

First, we'll cut the connector off. Second, we'll solder a new cable in place. I like to use a 1 meter long servo (3 wires) cable. Finally, we'll use heatshrink to protect the sensor's electronics. 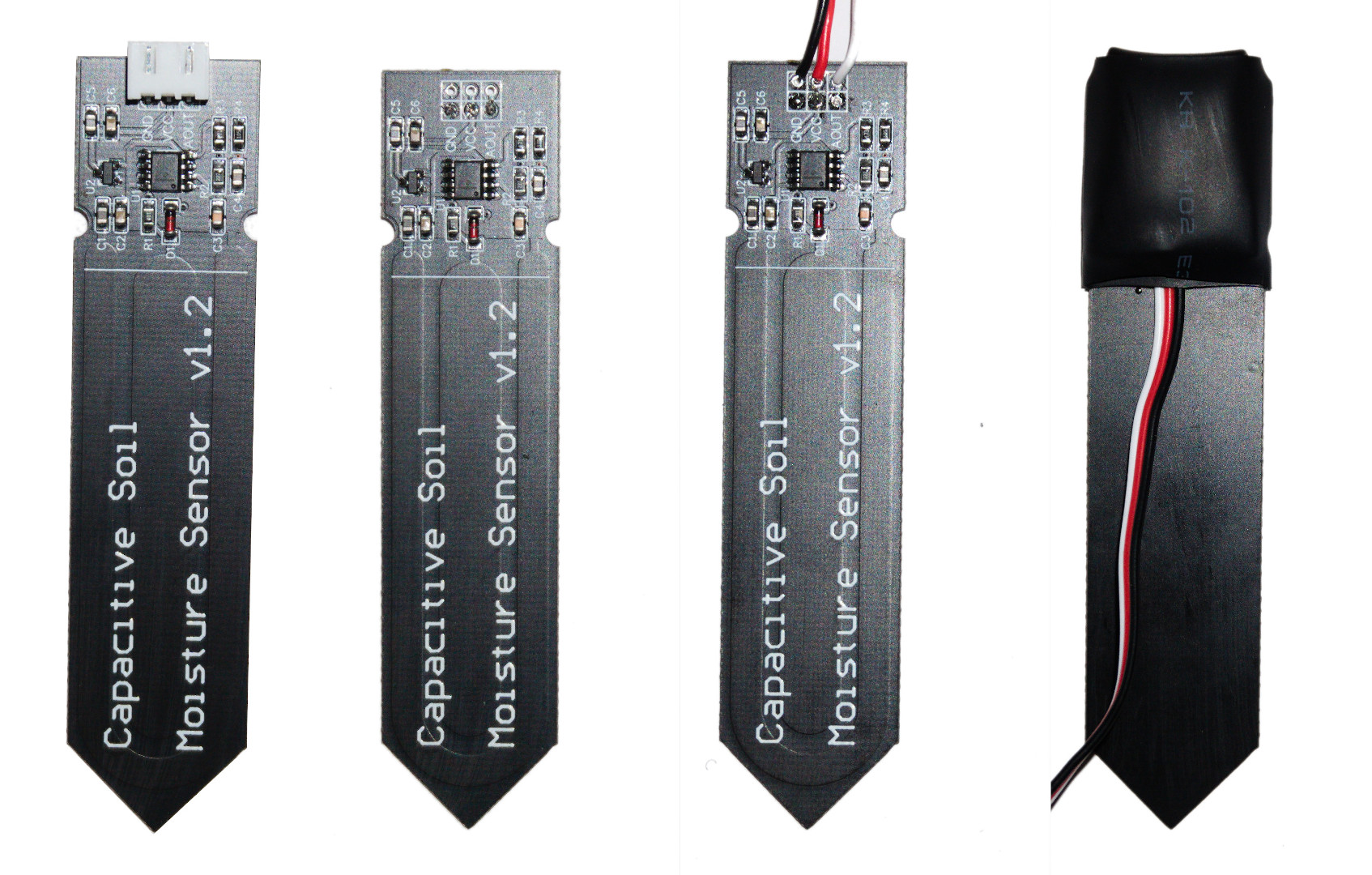 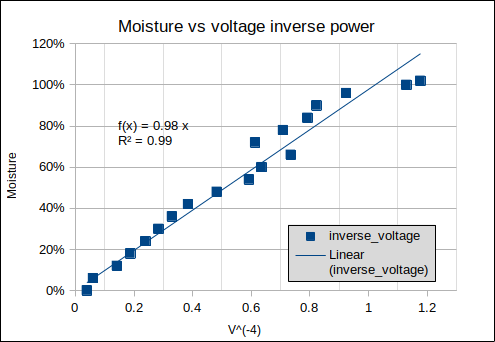 No joke, it's as simple as it gets. This formula gives the soil's moisture value with a 10% margin in a silt soil sample, which is not fabulous, but still quite good for the price, and good enough for our application. Anyway, we did mention the sensor was inaccurate but repeatable, and we'll compensate for that inaccuracy once we are in the field with a second field calibration.

To get the sensor value at 100% moisture, simply fully submerge the sensing part below the line (not the whole sensor!) in a glass of water, and write down the voltage or ADC value.

Note: if you use a different soil moisture sensor model, the calibration curve may change. You can get a rough estimate of a new, proper exponent for the curve by measuring the sensor output when submerging exactly 50% of the sensing part into water, then inserting that value in the formula above. Change the exponent until the formula outputs 50%. Again, we're following the "good enough" route, since we don't necessarily want to invest a lot of money into an expensive sensor.

# Connecting the sensor to Espoir and Home Assistant

If you're not familiar with Tasmota or Home Assistant yet, first follow our guide (opens new window) to setup Tasmota on Espoir. Then go to Configuration -> Configure module to set one of the IO pins to ADC Input, like so:

Here, we chose ADC 1. This is important for the next steps.

Next, we'll create a Berry script that transforms our raw sensor readings to a moisture value and sends them over MQTT to Home Assistant. From Tasmota's main menu, go to Consoles -> Manage File system and create a file named moisture.be. Add the following code to it:

We used our ADC number on that last line to match the pin to the new rule.

Then, create or edit a file called autoexec.be, and add the following line to it:

Now, every time a new value will be read from our moisture sensor, the corresponding moisture level will be sent over MQTT.

Finally we'll create a rule that allows Home Assistant to detect our new sensor. From Tasmota's main menu, go to Consoles -> Console, and paste the following code, which creates a rule where on each reboot, our new sensor will be discovered by Home Assistant:

Then enable the rule:

And restart the device to apply the change.

You should now see a new value "Moisture 1" appear under your Tasmota device in Home Assistant. 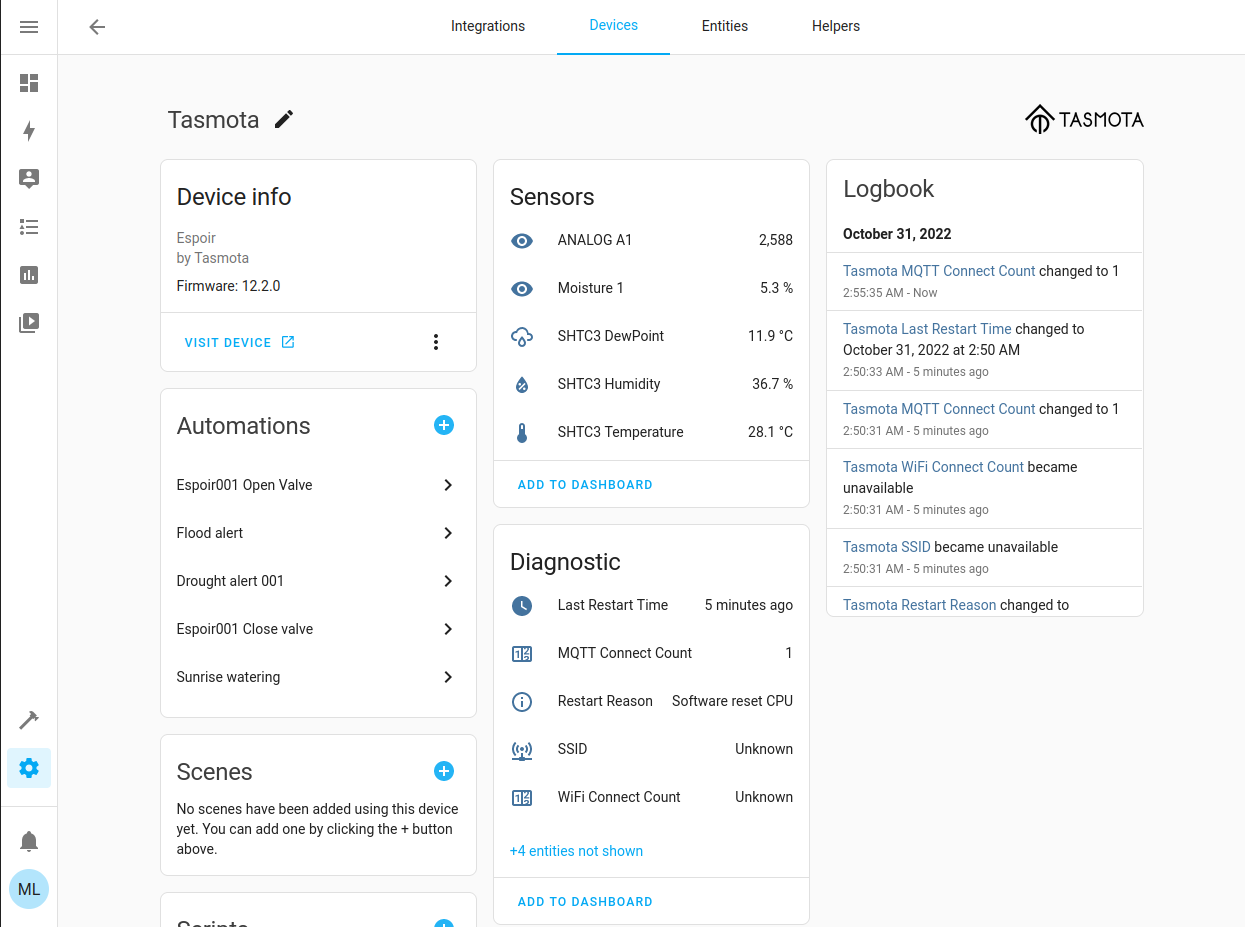 If you chose to use Connaxio's servo-valve (opens new window), you may now set one of Espoir's pins to PWM (the PWM number should be 6 or above) similarly to what we did for our ADC pin. Next, create a new file named autoexec.bat, and write to it:

Which will set the PWM module to output a frequency that can be used by servo motors. Restart the device when you are done editing the file.

Next, you must go to Tasmota's console and find the PWM values that open and close the valve. Simply write:

Where # is the PWM number you chose and XX is the PWM value, which is typically comprised between 20 and 100, but may be out of this range. 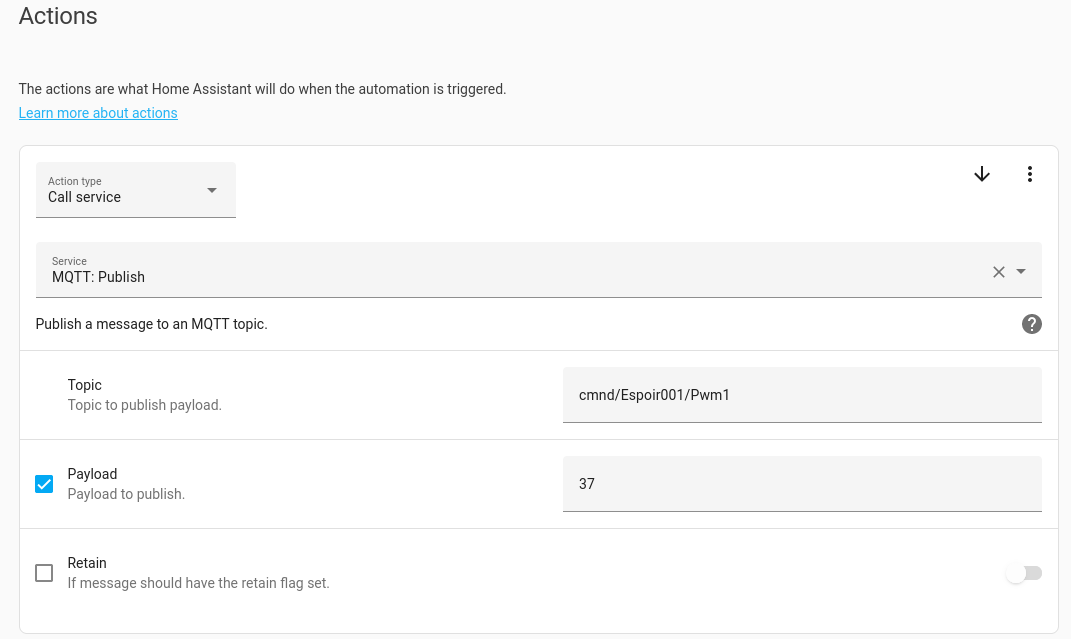 Now, remember when we talked about the Field Capacity, Permanent wilting point and Maximum Allowable Depletion levels? These will set your triggers to open and close the valve, possibly with a condition to only water between sunrise and sunset. Our irrigation rules will be similar to:

And how do we determine field capacity? Simply insert the sensor into the soil / plant pot you want to irrigate and drench the soil around it, preferably in the evening to reduce evaporation. We suggest putting a bowl or pot on top of the sensor to avoid moving accidently, because the calibration will probably need to be redone after that (remember when we said they aren't accurate, but they are repeatable?).

In the morning, look at the moisture value that is sent by the sensor. That will be your field capacity value. You should be able to observe a moisture curve similar to this one over the night: 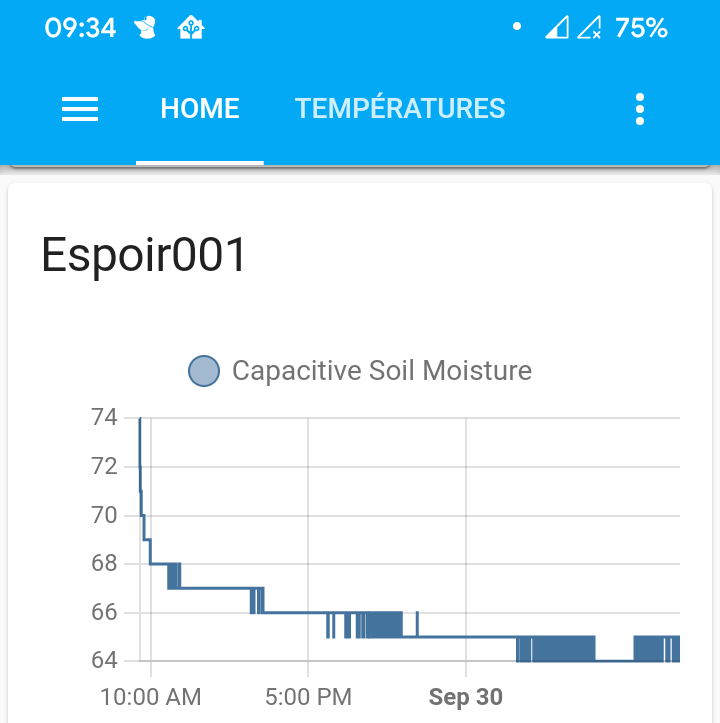 We can see that the excess water is drained by gravity overnight, the soil moisture stabilizing around 64% (in pure clay soil). Is this an accurate value? No, in fact it is pretty far off from our initial calibration curve, which may be due to the difference in the nature of the soil, or water-soaked wood chips around the sensor's head. It is, however, a repeatable measurement, meaning that whenever we have the same amount of water in the soil, the sensor will read the same value, as long as it is not moved.

And we now have a smart irrigation system that optimizes water usage to give us healthy plants, fresh vegetables, and small water bills.